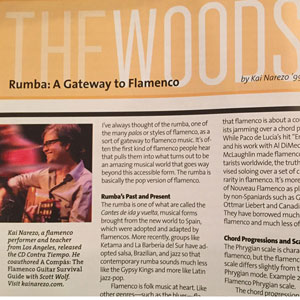 I just had an article published in the Summer, 2016 issue of Berklee Today magazine called Rumba: A Gateway to Flamenco about rumba patterns for the right hand. The article includes a bit of context about flamenco in general, but basically acknowledges that an awful lot of guitarists find their way to flamenco through the humble (and relatively simple) rumba. The first two examples are basic right-hand patterns with and without the mute-slap, the third example is an arpeggio pattern that makes use of the open B string in the Granaina key, and the fourth example is a little more advanced has both arpeggio and strumming (no mute-slaps) in the Taranta key.